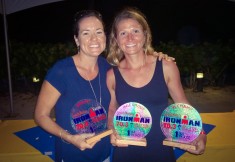 The storied race took competitors through the breathtaking scenery of the US Virgin Islands on three legs. They began with a running start into the waves of the Atlantic for a 1.24 mile swim. After that, the racers hopped on their bicycles for a 56 mile ride around Christiansted, including a brutal 600 foot climb known as “The Beast” that hits a maximum grade of 21 degrees. Finally, they finished with a 13.1 mile run through Christiansted.

Bridget Klein ran the entire event, winning first place in her age group despite suffering a flat tire during the bike race. Julie Sommer competed in the shorter Caribbean Sprint, taking first place among females and 5th place overall. David Johnson, one of the partners at Cane Bay, worked hard to set his racers up for success. “Our team members trained every day, and we loved being there to cheering them on,” said David Johnson. “We were so honored to be a part of this historic race.”

Bridget Klein, an Ohio native who moved to St. Croix in 2013, was ready for her second chance to compete in the Captain Morgan Ironman 70.3 St. Croix. “I always loved athletic competition,” said Klein. “When I was a kid, I competed in a few youth triathlons at the YMCA, and it just became a habit.” Klein went on to swim in a Division 1 program at St. Francis University in Pennsylvania, where her coach encouraged her to continue her athletic career in triathlons. She qualified for USAT Nationals in 2008 and quickly climbed the ranks, representing Team USA in 2012 in New Zealand. She is currently training to compete in the Vermont 100 with her husband, Mike.

Julie Sommer, on the other hand, didn’t get into athletic competition until later in life. As a child, she never played sports, and always saw herself as the unathletic one in the family. In 2005, that started to change as she participated in her first triathlon, an Olympic distance race in Lake St. Louis. When she moved to St. Croix in 2008 she began competing regularly. “It all started on the plane ride down here,” said Sommers. “I was moving to St. Croix, and I ran into a group of Crucian triathletes on the way. I haven’t stopped competing since.” She has raced in 4 of the last 5 Captain Morgan Ironman 70.3 St. Croix competitions.

Cane Bay Partners VI, LLLP was formed in June 2009 and founded by internationally experienced business executives with many years of experience in the financial services industry. Focusing our efforts primarily in the financial services industry, our management consulting practice specializes in providing services to clients in need of sophisticated risk management models, debt collections organizations which require liquidation models and analytics, and portfolio management companies desiring a variety of services.  More specifically, our practice has elected to specialize in three areas where we believe our core competencies reside: (1) management consulting (2) risk management/scorecard development and (3) service provider analysis.